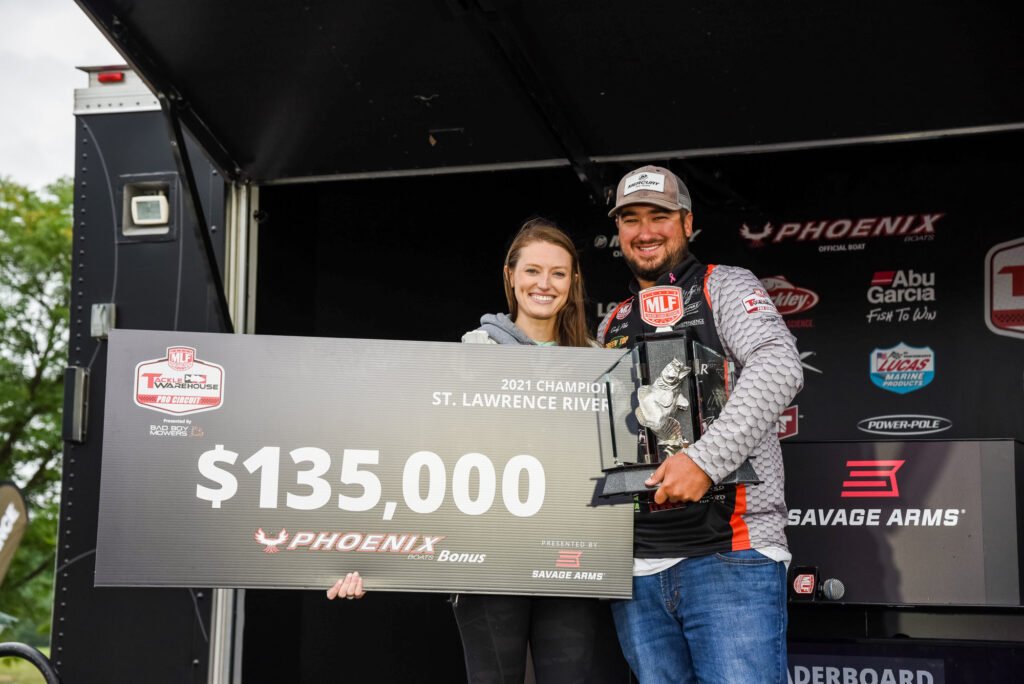 “You don’t do this sport for the money, you do it because you love it,” said a very emotional Pike after earning the win. “This is awesome – it’s like a dream. I’ve tried to make it here for so many years.

“I qualified [for the Pro Circuit] through the Toyota Series last year,” continued Pike. “You aren’t guaranteed the opportunity to make it and fish these professional circuits every year, so I went ahead and jumped on the opportunity and I’m loving it.”

“Things happened this week that made no sense – things that weren’t supposed to happen and there was no explanation to it,” said Pike. “I had one main area that I was fishing today, with 15 to 20 good spots along it. I just kept making circles through those areas and kept getting bites.

“I honestly couldn’t ask for more,” continued Pike. “To qualify for the TITLE, then fish in the Top 10, find myself in contention for the win – then take home the win, all in my rookie season – it’s just unbelievable.”

Pike said he loves catching smallmouth but would not consider himself a smallmouth angler. Add his lack of experience fishing rivers to that and his expectations for this event were low.

“I could understand figuring out fish that I was more comfortable with, but to do this on a smallmouth fishery is just incredible,” said Pike. “I usually get my tail kicked in smallmouth tournaments.

“I mostly fished shoals and rock piles the size of my boat this week. If I didn’t get bit on the first cast, I just moved to the next one. I probably had 40 to 50 spots that I found during the tournament. Once I knew I had a solid bag each day, I could just go fish and look around. That helped a lot.”

Pike said he caught most of his fish this week drop-shotting a green-pumpkin Berkley PowerBait MaxScent Flat Worm with a 1/2-ounce Eco Pro Tungsten weight and 6- and 7-pound-test Gamma Touch fluorocarbon line.

“I had no idea what I needed to do to catch Joey [Cifuentes] going into today. He had such a strong lead, I just didn’t think it was going to happen,” said Pike. “I still can’t believe it.

“This trophy means a lot. People work their whole lives for this and don’t ever get one. I got lucky and everything lined up just right to go home with one my rookie year – that doesn’t happen often.”

The MLF Tackle Warehouse Pro Circuit Presented by Bad Boy Mowers, Savage Arms Stop 6 Presented by Abu Garcia at the St. Lawrence River will feature live on-the-water coverage and a two-hour action-packed television show that will premiere on the Outdoor Channel on Sunday, Sept. 1 from 7 to 9 a.m. ET and re-air on the Sportsman Channel this fall.

The MLF Tackle Warehouse Pro Circuit Presented by Bad Boy Mowers, Savage Arms Stop 6 Presented by Abu Garcia at the St. Lawrence River was hosted by the Town of Massena.

In Tackle Warehouse Pro Circuit competition, the full field of anglers competed in the two-day opening round on Thursday and Friday. The top 50 pros based on their two-day cumulative weight advanced to Saturday. Only the top 10 pros continued competition on Sunday, with the winner determined by the heaviest accumulated weight from the four days of competition.

Pro Clabion Johns of Social Circle, Georgia, clinched the Polaris 2021 Rookie of the Year (ROY) award on Friday, which is awarded to the rookie pro angler who finishes the season with the highest point total. For his efforts, Johns won a Polaris Ranger 1000.