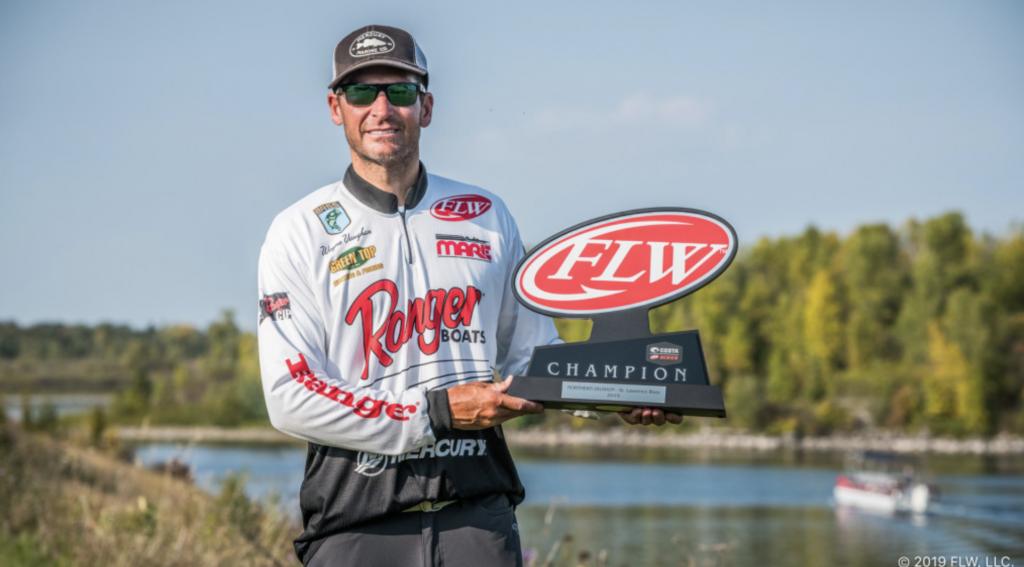 Vaughan’s three-day total of 15 bass weighing 63 pounds, 5 ounces was enough to earn him the victory by a 1-pound, 9-ounce margin over second-place pro Scott Dobson of Clarkston, Michigan, and earn him $83,340, including a new Ranger Z518L boat with a 200-horsepower Evinrude or Mercury outboard. The tournament was the third and final regular-season tournament of the year for anglers competing in the Costa FLW Series Northern Division presented by Gajo Baits.

“I caught a few fish this week on a tube, but every fish that I weighed in came drop-shotting a Redbone-colored Z-Man Jerk Shadz,” said Vaughan, who earned his first career victory in FLW competition. “I fished basically from takeoff all the way down to Clayton, hitting 20 to 25 spots each day.

“The first day my numbers were not that great – I think I only caught 10 fish,” Vaughan continued. “On the second day I caught around 25, and today I only caught 10. I was fishing around the ends of points – I caught them all in 35- to 55-feet-of-water. Yesterday the current was moving really well, so it had the fish up a little higher – around 35 feet. Today, I couldn’t get them that shallow and had to go real deep. I caught one down 55 feet.”

When asked what he felt was the key to his victory, Vaughan was honest and blunt with his answer – “luck.”

“I had no keys,” Vaughan joked. “I think my key was luck. I had caught a couple of fish in practice, but the last day I caught a 6-pounder way out deep. I told myself, ‘That is definitely where the big ones live, and I’m committing myself to this.’ It was a grind – I was only getting one or two fish on each of those spots.

“It’s been a great year, and to win at the last event of the year is just a great way to end the season,” Vaughan went on to say.

The top 10 pros on the St. Lawrence River finished:

Vaughan weighed in a 6-pound, 5-ounce bass Friday – the heaviest of the tournament in the Pro Division – and also earned the day’s Boater Big Bass award of $256.

Noah Winslow of Naugatuck, Connecticut, won the Co-angler Division with a three-day total of 15 bass weighing 50 pounds, 11 ounces. For his win, Winslow took home the top prize package of a new Ranger Z175 boat with a 115-horsepower outboard motor, worth $27,100.

The top 10 co-anglers on the St. Lawrence River finished:

Henry McKee of Haddon Heights, New Jersey, caught the biggest bass of the tournament in the Co-angler Division Friday, a fish weighing 6 pounds, 4 ounces. He earned the day’s Co-angler Big Bass award of $170.

About FLW
FLW is the world’s largest tournament-fishing organization, providing anglers of all skill levels the opportunity to compete for millions in prize money in 2019 across five tournament circuits. Headquartered in Benton, Kentucky, with offices in Minneapolis, FLW and their partners conduct more than 290 bass-fishing tournaments annually around the world, including the United States, Canada, China, Italy, South Korea, Mexico, Namibia, Portugal, South Africa, Spain and Zimbabwe. FLW tournament fishing can be seen on the Emmy-nominated “FLW” television show while FLW Bass Fishing magazine delivers cutting-edge tips from top pros. For more information visit FLWFishing.com and follow FLW at Facebook, Twitter, Instagram and YouTube.