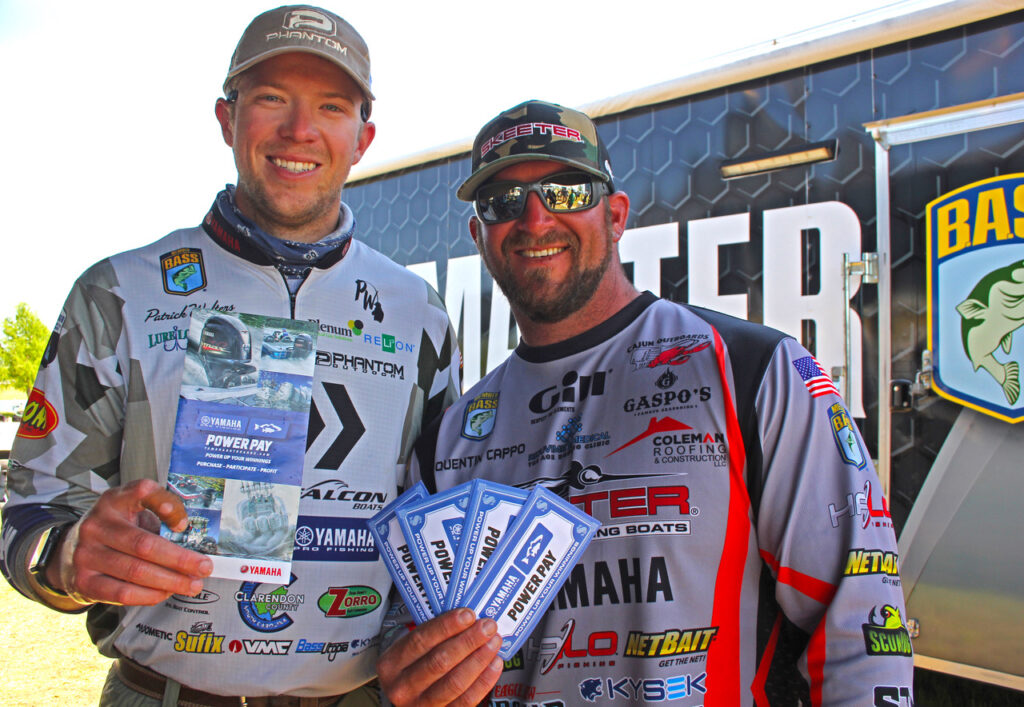 Walters and Cappo also chimed in backstage during the weigh-in about why they choose Yamaha power during competition.

“One word. Reliability,” said Walters. “Every time I turn the key, I know my Yamaha is going to get me where I need to be with zero issues.”

Cappo agreed. “Reliability and dependability are what I love most about my outboard. If I can see it on the map, I know my Yamaha can get me there to fish it.”

Explosive topwater strikes were also central to the two anglers’ success on Lake Fork. Walters caught a 9-pounder the final day on a topwater. Cappo says topwater is what he loves to do best, so as long as Lake Fork’s numerous giants were crushing it, he kept throwing it.

In the end, it was a great week in East Texas for both Yamaha pros. But you don’t have to be one of the world’s best topwater anglers or a touring pro to cash-in on Yamaha’s Power Pay contingency money, and you don’t have to win tournaments to take home Power Pay cash.

Anglers simply have to be the highest finishing registered participant in a Power Pay-supported tournament. Power Pay is not just for bass anglers – it also includes eligible saltwater, walleye, high school and college anglers (over the age of 18) through hundreds of events.

Introduced in the fall of 2019, Power Pay gives anglers the opportunity to receive compensation for running eligible Yamaha outboards. Eligible anglers running Yamaha outboards can sign up for the program by visiting yamahapowerpay.com. All applicants are required to accept and adhere to the Yamaha Angler Code of Ethics before completing the registration for the program. Once registered, the highest placing angler in specified Power Pay sanctioned tournaments that meets all eligibility requirements will be compensated by Yamaha accordingly.

For more information and complete terms and conditions about Power Pay, visit yamahapowerpay.com. Some restrictions apply. Void where prohibited by law.

Yamaha Marine products are marketed throughout the United States and around the world. Yamaha Marine Engine Systems, based in Kennesaw, Ga., supports its 2,000 U.S. dealers and boat builders with marketing, training and parts for Yamaha’s full line of products and strives to be the industry leader in reliability, technology and customer service. Yamaha Marine is the only outboard brand to have earned NMMA®’s C.S.I. Customer Satisfaction Index award every year since its inception. Visit www.yamahaoutboards.com.