Adding 13-pounds, 2-ounces on day two to his day one tournament leading 16-pounds, 14-ounces, Patrick Walters retains the NPFL Watts Bar lead with a two-day total of 30-pounds. Walters was seen on live covering water both shallow and deep and had a slower start to his day than expected. He holds a 9-ounce lead going into Showdown Saturday. 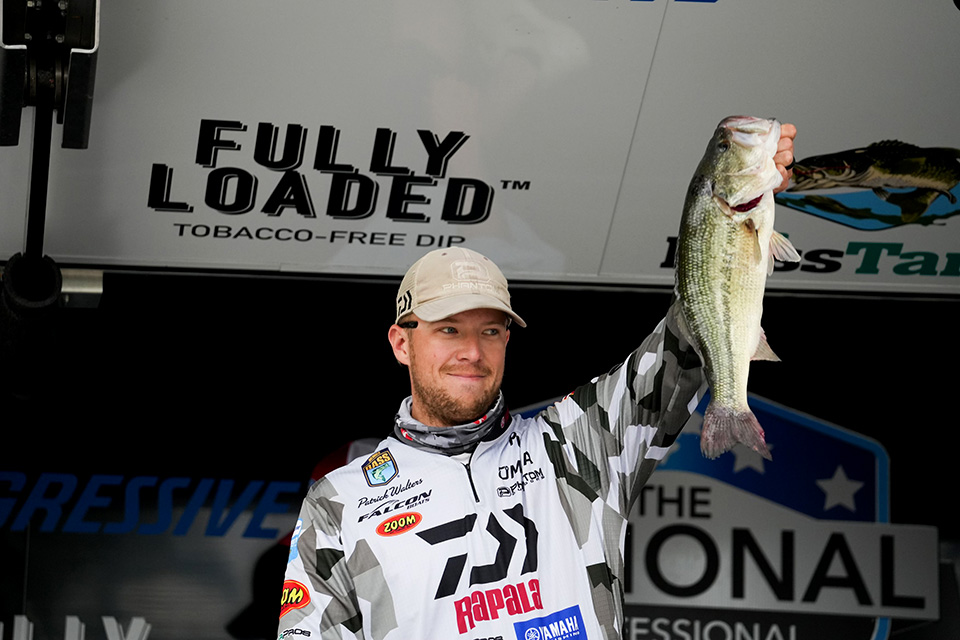 “I didn’t get to my good water until later this afternoon but I thought I could catch more fish on the way up there than I actually did – It was a grinder. I am fishing a lot of spots but I slowed down some today to try and work some areas more.”

Tomorrow, Walters is planning to fish double the waypoints he did today and try to convince some of the bigger bass in each area to bite. Getting into a rhythm is key and it just didn’t seem to work out for him on day two.

“These fish are educated and if you get one to bite and break up the group, they just settle back in and won’t t bite again. I am fishing mainly a Zoom Trick Worm and a Mag Trick worm and have been trying to get the cranking deal going but it just hasn’t happened yet. If they eat the Rapala DT20 tomorrow it will be a different ballgame.”

With his biggest bag of the tournament thus far, Ryan Satterfield weighed in 15-pounds, 10-ounces on day two for a two-day total of 29-pounds, 7-ounces to finish in the 2nd place spot. After a practice period with little or nothing to go to during the tournament, Satterfield settled in on an inside channel swing loaded with grass and post spawn bass.

“I don’t have a lot of spots, and yesterday I caught them in twenty minutes. Today I didn’t get as many bites, but still was able to leave them alone early in the day. They are the right size fish for this tournament and I got the right bites today; I was done by 10:30 AM this morning and left it alone.”

Focusing on a high percentage area that’s perfect for holding post spawn bass, Satterfield is fishing the outside bend of a creek channel on the edge of a big spawning flat. The other key, its loaded with grass.

“So far, I have not had to change my approach much, and I am dropping my Powerpoles in shallow water and casting out into the channel. If I can float a bait through the grass, I am getting bites. It’s a high percentage area and I am definitely around the right fish – I can’t wait to get back out there and see what happens.”

With a two-day total of 28-pounds, 10-ounces, Sheldon Collings finishes day two in the 3rd place spot. Collings relied on a late afternoon charge to catch his bag of 13-pounds, 14-ounces after a slow start to his day on Live Coverage. The patience paid off as he landed on a school willing to bite and was able to cull up to his final weight.

“I have been catching them on docks and shallow wood but it was not going today at all. I fished a pile of new water and eventually got back to where I caught my bigger bass yesterday. I happened to notice some grass and brush out in front of the docks on my live sonar and went to work with a jerkbait.”

After culling up to his weight for the day in less than ten minutes, Collings used his final hour of the tournament to idle the pocket and mark all of the brush in the area. Depending on the weather, either the bass will slide back under docks or hang out on the cover in front.

“If I can catch them on Livescope and a jerkbait, I am happy. If they slide back under docks, I will be able to catch them there. There are a lot of fish in that area and I just have to adapt to the conditions tomorrow.”

With the biggest bag of the tournament, including a lunker weighing 7-pounds even, Matt Massey weighed 19-pounds, 10-ounces to finish day two in the 4th place spot. He has a two-day total of 28-pounds, 7-ounces. Massey expanded on his day one water and specifically fished new water on day two.

“Man, it was one of those days. I stayed close this morning to get a quick limit, and I had about 8-pounds by 9 AM. After that, I just focused on transition areas where I thought they would go to after spawning.”

Massey was able to figure out a subtlety to the type of transition area he was running and made a lot of good decisions. He is fishing old school type presentations, rotating through three confidence baits from the days he has spent in Colorado fishing rock and wood.

“I was almost able to call my shots – I could do no wrong. Once I figured out the way it was working, I ran new water all day and caught fish between 1 foot and 22 feet deep. I didn’t lose any fish today and the areas I fished I have never seen before, I just expanded on what I fished yesterday.”

Massey is confident he can run around on day three and try to duplicate his success.

Adding 12-pounds, 2-ounces on day two, Pug Clements worked his junk fishing pattern again to finish in the 5th place spot with a two-day total of 26-pounds, 12-ounces. Starting on a shad spawn deal to begin his day, he fished a spot he had saved and was able to capitalize on some bigger bites.

“I caught two of the fish in my bag on the shad spawn deal this morning and I think Taylor (Watkins) caught some there too. I then went to a place I have been saving and I caught the other three. Everyone probably saw on live but I was fishing a specific way I fish back home and its very specific to get bites.”

Making only one pass on his productive stretch, Clements is looking forward to putting the hammer down and trying to catch a big bag. He is fishing a bait and technique he is very comfortable with and hopes with changing conditions he can up his weight on Showdown Saturday.

“I really think I can catch them good in there and as of now I am the only one in there. I have to present the bait very specifically and it’s a tight window. The only thing I am comfortable with is a white swim jig – once you can figure out the rate of fall and the retrieve, you can really catch them.”

Clements is fishing his swim jig on a Jenko DCBR High Roller Rod in a 7’ 1” medium heavy action.

Take care of all your tackle needs here!