QUITMAN, Texas — Patrick Walters of Summerville, S.C., took advantage of a dramatic increase in opportunity to sack up a five-bass limit of 32 pounds, 14 ounces to lead Day 1 of the Guaranteed Rate Bassmaster Elite at Lake Fork. 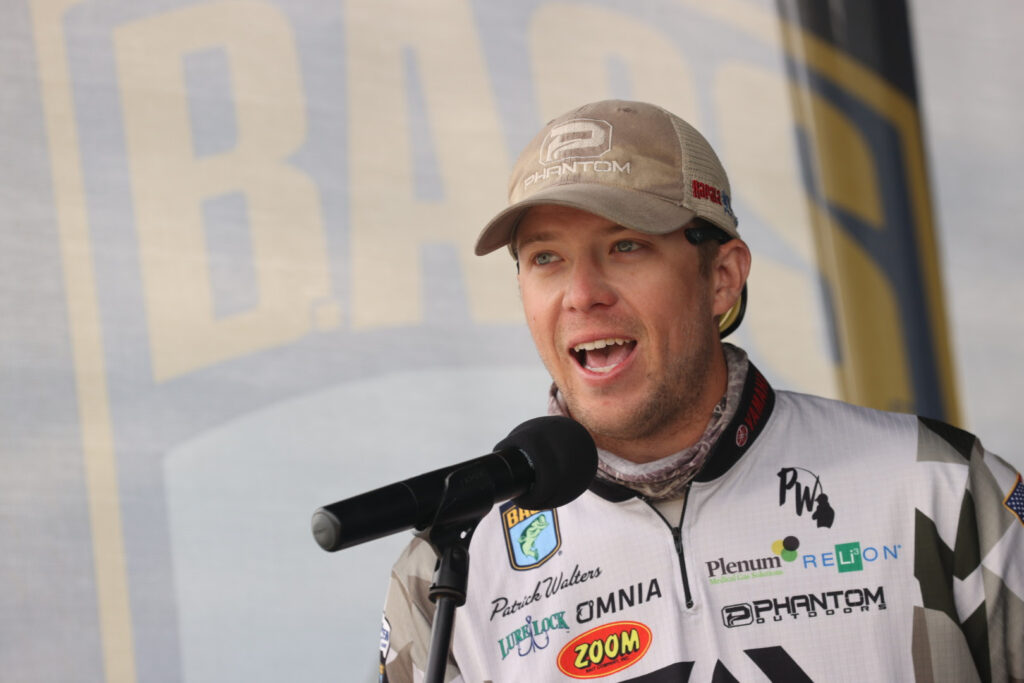 Patrick Walters, of Summerville, S.C., is leading after Day 1 of the 2021 Guaranteed Rate Bassmaster Elite at Lake Fork with 32 pounds, 14 ounces.

“My plan this morning was to start on shallow points and catch one or two fish,” Walters said. “When I got out there, I was surprised how many fish I started to see; it was like they multiplied from practice.

From there, Walters began running points and inspecting each spot with his Garmin Panoptix LiveScope. He reported finding bass grouped in numbers far exceeding anything he’d found in practice.

“Every point I started going to, the fish quadrupled on the places I found them, whereas in practice, on my starting spot, I caught one on a glidebait and it had one with it. I went back there today and there were 15 fish sitting on that spot.

“After that, I just starting running areas like that, and I’m pretty surprised what’s showing up. They almost seem prespawn, so I don’t know if that bite is going to get even better.”

Noting that he caught one small fish in 45 minutes of bed fishing, Walters said he spent the majority of his day throwing a glidebait and multiple jerkbaits on the offshore spots.

He wants to see his fish in a particular depth zone, as this indicates an interest in feeding. Walters found that not all of the fish he spotted on LiveScope were actually ready to go.

“I’m really surprised by the fish that are showing on the majority of spots I’m fishing, but it’s just getting them to bite,” he said. “There’s a weird bite going on; you have to fish slow sometimes, but I think if we keep our foot on the gas and fish for the aggressive fish, I think we can catch some fish this week.

“Hopefully we can just ride it out and make it to the weekend. That’s the plan — just make it to Championship Sunday.”

Friday’s forecast for rainy, windy conditions could play well for Walters. Many of his competitors spent larger portions of their day sight fishing. A dimmer day will significantly limit that pursuit, but Walters is prepared to deal with any impacts on his game plan.

“You can’t control any of the variables, especially Mother Nature, so you just have to adapt and go with whatever you’re presented with,” he said. “We’re just going to go fishing tomorrow and stay on our toes, adapt as much as possible and hopefully get five good bites.”

Enjoying a quick start, Walters tallied approximately 20 pounds with four fish by about 8:20 a.m. A dry spell followed, until Bassmaster LIVE saw him come tight on a serious fish that went 8-14.

About 30 minutes later, he culled a 2-pounder with a 5-8. Hooked in the back, that fish put Walters through a nail-biting battle before rising into reach.

Quentin Cappo of Prairieville, La., is in second place with 28-15. Starting his day with an 8-3 at 7:25, Cappo did his damage on shallow, rocky bottom.

“I’m excited to go out tomorrow; I’ve found them, I know where they’re at, it’s just a timing thing,” Cappo said. “I need wind on my spots. When the wind blows, I can catch them.”

Cappo caught all of the bass he weighed on a large-body squarebill. He’s using an aggressive presentation he described as “dredging” to stir up the bottom and trigger bites.

“The fish are feeding on big gizzard shad and I’m looking for five good quality bites,” Cappo said. “Fortunately, I had 18 keepers in the 3- to 8-pound range. I stepped on the gas because you don’t know what tomorrow’s going to bring.

“This is a heavily pressured lake and they see these baits (often), so something different gets them fired up. When I’m there at the right time, it’s fast and then I get off of them.”

Brandon Card of Salisbury, N.C., is in third place with 27-6. Bed fishing was his opening game plan and while Card sight fished a 4 1/2-pounder, he ended up catching all of his weight fish by targeting offshore hard spots from 7 to 20 feet.

“I actually found a couple more areas that had some really good spawners, but the carp had muddied them up and finally, I said, ‘Forget this, I’m going to go out there and fish offshore like I like to fish,’ and it just kind of unfolded.

“I had some offshore places that I was confident about but I didn’t know how good they were going to be. On my best spot, I thought I was going to be able to catch a few, but it was unbelievable. I probably caught 20 fish off that spot.”

Card said he caught some fish with dragging presentations but most bit reaction baits.

There were 36 bags of 20 pounds or more caught and 10 bass over 7 pounds. Walters is in the lead for Phoenix Boats Big Bass honors with his 8-14 largemouth.

Walters leads the Bassmaster Angler of the Year standings with 433 points. Seth Feider of New Market, Minn., is in second with 424, followed by Chris Johnston of Peterborough, Canada, with 382.

Josh Stracner of Vandiver, Ala., leads the Rookie of the Year standings with 340 points.

Friday’s takeoff is scheduled for 6:45 a.m. CT from Sabine River Authority (SRA) — Lake Fork. The weigh-in will be held at SRA at 3 p.m.

The Top 49 anglers after Friday’s weigh-in will advance to Saturday’s semifinal round.

Live coverage for the event can be streamed on Bassmaster.com and the FOX Sports digital platforms.

The tournament is being hosted by the Sabine River Authority and Wood County Economic Development Commission.