With a limit of 16-pounds, 14 ounces including a 6-pound, 6-ounce kicker, Patrick Walters takes the day one lead at the NPFL stop three on Tennessee’s Watts Bar Reservoir. After a slow start to his morning, Walters was able to nickel and dime his way to a solid limit on the day. 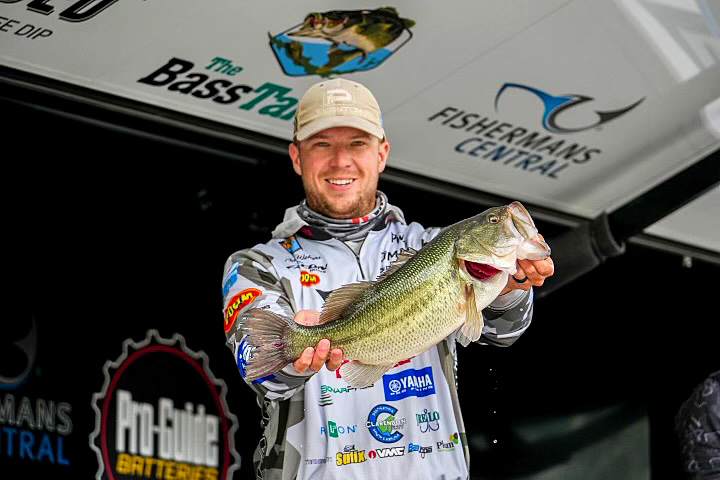 “I was boat five and I knew I had my choice of an area. I wanted to start shallow but I started offshore and it just wasn’t happening. I bounced around and ran both shallow and deeper water for a while and finally got my first keeper at 8 AM. It took a lot longer than I thought it would.”

Walters used around 16 or 17 rods on the day and kept one side for shallow and one side for offshore bite. He does not believe that timing matters much throughout the day but noted they definitely bite better when there was water moving.

“I think they are going to be pulling some water tomorrow and I have a long day. Today I felt like my back was against the wall a little with time but it should be good tomorrow. I am looking at them on my electronics and scanning around for my bait, fish and any structure.”

With 14-pounds, 12-ounces, Sheldon Collings brought a limit to the scales on day one good enough to finish in the 2nd place spot. After a quick start to his morning that included a limit in the first twenty minutes, Collings moved around the rest of the day looking for bigger bites.

“I was semi surprised with today as my practice was not great. I started on schooling fish and got that quick limit and then mixed up a ton of baits and a ton of spots to expand on my early 11-pound limit.”

With a longer day coming tomorrow, Collings is excited to go get back out but warns that the lack of sun (tomorrow) may affect his pattern as the tournament progresses along. Relying on bigger fish, he knows that the key to staying near the top throughout the week is getting those bites.

“All my weight came basically because of those three bigger bites. I am catching a ton of keepers but those few got me up there in weight. I did lose a big one today, probably a five pounder and it wrapped me around a tree.”

Finishing the day in the 3rd place spot, Pug Clements ran a junk fishing pattern to catch his 14 pounds, 10 ounces on day one. He visited several types of areas, both shallow and deep, and use several types of baits and noted that the big bites were few and far between.

“There isn’t much to say unfortunately; I caught some fish all over. I got two good bass on a shad spawn deal this morning, caught two others from my bag flipping laydowns and caught one off a brush pile in 24-foot.”

Admitting to preferring to have a pattern to run, versus running around junk fishing, Clements is sticking with his guns on day two and hoping for a couple more bigger bites to anchor his bag.

“The only deal I was able to catch a fish over 3-pounds is on that shad spawn or flipping laydowns. I am getting a bunch of bites but a lot of those are short fish mixed in. I have no idea what’s going to happen, I am just fishing.”

After a rough practice period, Shawn Murphy relied on a “just go fishing” mentality and weeded through several small schools of fish to catch 14-pounds, 9-ounces to finish the day in the 4th place spot.

Spending some time behind the wheel and locating small groups of fish now and then, Murphy was able to capitalize on bass that were set up correctly for him to effectively present his bait. As for tomorrow, more of the same.

“I honestly never got on any schooling fish or found anything to start on and I just have to go and try to find some of those same fish and look for new ones too. I did catch a few on Active Target in front of the boat and watched them eat my bait.”

With 14-pounds, 7-ounces on day one, Dale Prinkey ended the day in the 5th place spot by relying on just one spot he found on day two of practice and one productive bait.

“I didn’t get on this spot until early afternoon and I saw guys on it most of the morning but I mixed up a lot of different baits and there is only one in particular I can get them to commit to.”

Obviously not wanting to let the cat out of the bag just yet, Prinkey is confident if he can get back on the spot and settle in with some current moving, he has a shot to catch more on day two.

“There is a lot of fish there if they move water at all, they stack up and I should be able to get on it again.”

Rest of the best:

Get all of your tackle here!