ST. CLAIR SHORES, Mich. (Sept. 11, 2021) – It was very different conditions for the 40 pro anglers competing Saturday in Group B at the Major League Fishing (MLF) Bass Pro Tour CarParts.com Stage Seven at Lake St. Clair Presented by Covercraft in St. Clair Shores, Michigan. However, after the anglers had battled through the strong winds and the final bass had been tallied the results were remarkably similar to Friday, with an East-Tennessee angler sitting atop the leaderboard. 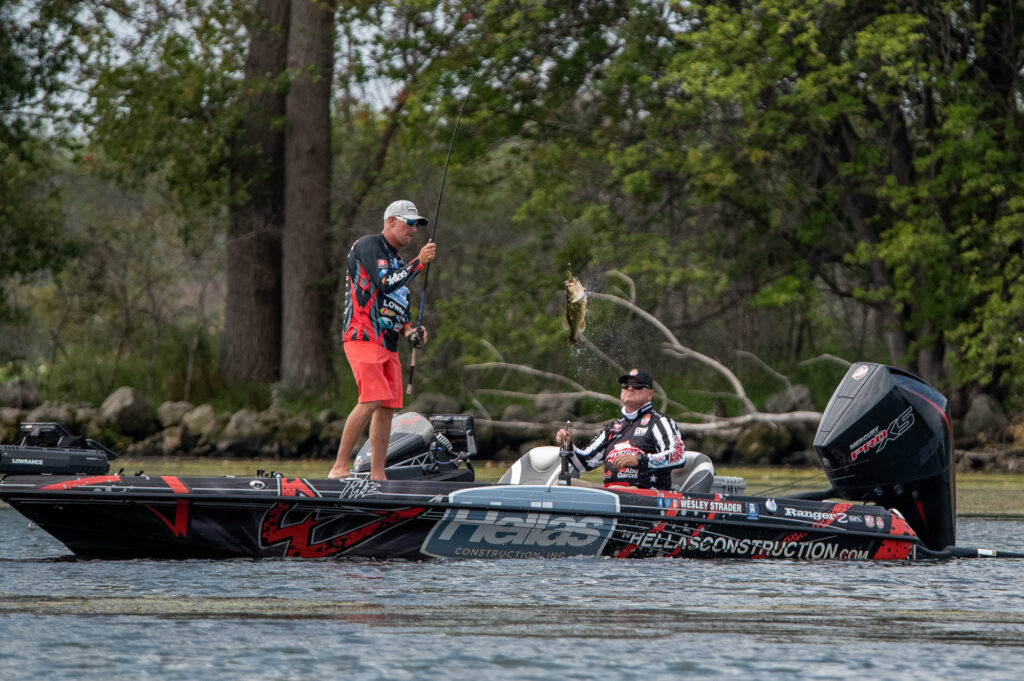 Pro Wesley Strader of Spring City, Tennessee, boated 34 bass weighing 93 pounds, 4 ounces, to grab the early lead in Group B after Day 1 of their two-day Qualifying Round of competition. Strader will bring a 12-pound, 4-ounce lead into Group B’s Qualifying Round finale on Monday.

Right behind Strader in second place is Russellville, Arkansas pro Fred Roumbanis, who was near the top of the leaderboard for most of the day. Roumbanis boated 29 bass totaling 81 pounds even to finish the day. Rounding out the top three was Favorite Fishing pro Zack Birge of Blanchard, Oklahoma, who caught 27 bass for 75-14 to end the day in third. Local pro Scott Dobson of Clarkston, Michigan, weighed 17 bass totaling 44-8 to rest in 5th place, while Kalamazoo’s Jonathon VanDam boated seven bass weighing 20 pounds even to sit in 23rd.

The 39 anglers in Group B will now have an off day on Sunday, while the 40 anglers competing in Group A will complete their two-day Qualifying Round of competition. Group B will conclude their Qualifying Round on Monday. The six-day event, hosted by Macomb County, St. Clair Shores and the Detroit Sports Commission, showcases the 80 top professional bass-fishing anglers on the planet competing for a purse of $805,000, including a top cash prize of $100,000 to the winner.

“Well, today has been a really, really good day,” Strader said in his post-game interview. “I really only needed about five of these Powell rods on my deck today and that was it.

“This morning I started out throwing a 3/8-ounce white (Z-Man) ChatterBait Jack Hammer with a Zoom Z-Swim behind it,” Strader said. “I threw that on a Powell Endurance 755 CB rod with a (Lew’s) Pro TI reel, spooled with 20-pound Sunline Sniper line. I also caught quite a few punching – I ran out of Zoom Z-Hogs. But I punched with a Powell Endurance 806 rod and a Lew’s Custom Pro reel, using 50-pound Sunline FX2 braided line, a 1½-ounce weight and a 5/0 TroKar TK130 hook.

“The thing that really got us going towards the end, though, was a Zoom Zlinky,” Strader continued. “I wacky-rigged it with a 2/0 Neko-style Trokar Hook and a 1/8-ounce Eagle Claw nail weight in the nose of it.

“All in all, I’ve got a couple of things figured out for Monday,” Strader went on to say. “I have a couple of areas that I couldn’t even get to today – it would have beat us to death with the wind. I also didn’t want to leave my fish biting. I’m excited to get back out there and see how it all shakes out.”

Second-place angler Fred Roumbanis also raved about the fun he had on the water Saturday, despite losing multiple key fish.

“I had an amazing day, despite the fish that I couldn’t get in the boat,” Roumbanis said. “I must have lost six 4- or 5-pounders today. But it was exciting – I almost gave up on the spot where I fished, but when I slowed down I really started catching them.

“I’ve got absolutely no complaints – I think I may have finally broken the curse that this place has had on me for all of these years,” Roumbanis went on to say. “I think I’m in great shape to make the Knockout Round – I’m just going to have to catch a couple of more fish. But man, it’d be so nice to win and automatically advance to the Championship Round. Wesley (Strader) and Zack (Birge) are crushing them, but I’m going to give those guys everything that I’ve got.”

The 40 Anglers in Group A compete in their two-day qualifying round on Lake St. Clair on Friday and Sunday – the 40 anglers in Group B on Saturday and Monday. After each two-day qualifying round is complete, the anglers that finish in 2nd through 20th place from both groups advance to Tuesday’s Knockout Round, while the winner of each group advances directly to Wednesday’s Championship Round. In the Knockout Round, weights are zeroed and the remaining 38 anglers compete to finish in the top 8 to advance to the Championship Round. In the final day Championship Round, weights are zeroed and the highest one-day total wins the top prize of $100,000.

Anglers will take off from the 9-Mile Ramp, located in St. Clair Shores, at 8 a.m. ET each day of competition. The General Tire Takeout ceremonies will also be held at the Launch Ramp, beginning at 5 p.m. each day. Fans are welcome to attend all takeoff and takeout ceremonies and also encouraged to follow the event online throughout the day on the MLF NOW!® live stream and SCORETRACKER® coverage at MajorLeagueFishing.com.

As part of the event fans will also be treated to the Bass, Brews & BBQ Festival at Blossom Heath Park in St. Clair Shores, on Sunday from noon to 9 p.m. The festival is a chance for fishing fans to meet their favorite Bass Pro Tour anglers, enjoy food and beverages from local food truck and St. Clair Shores Micro Breweries, watch the on-the-water action at the MLF watch party, shop at numerous MLF sponsor and local vendor booths, and enjoy live concerts from local musicians each day. For more information on the Bass, Brews & BBQ Festival hosted by Macomb County, visit MajorLeagueFishing.com.