OSAGE BEACH, Mo. (May 3, 2022) – Academy Sports + Outdoors pro Jacob Wheeler of Harrison, Tennessee, boated just four scorable bass weighing 16 pounds, 9 ounces, Tuesday, but it was still enough to hold off a hard-charging Keith Poche of Pike Road, Alabama, and win the two-day Qualifying Group B round at the MLF Bass Pro Tour Bass Boat Technologies Stage Four on Lake of the Ozarks Presented by Bass Cat in Osage Beach, Missouri. After Wheeler started the day with a 16-pound, 5-ounce lead, Poche, who started the day in 15th place, caught 14 bass weighing 40-15 to rally to within 7¼ pounds of Wheeler’s lead late in the third period, but alas Wheeler had already caught enough to earn the victory with a two-day total of 19 bass weighing 64 pounds, 2 ounces. 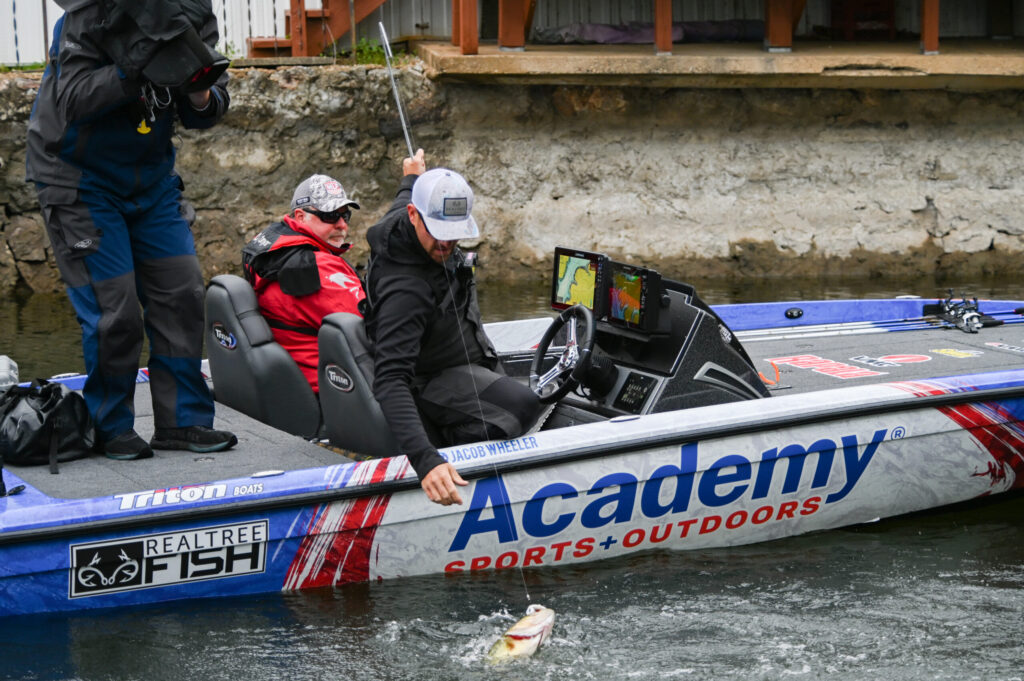 The remaining 38 anglers – 19 from each group – now advance to Wednesday’s Knockout Round, where weights are zeroed, and the anglers compete to finish in the top eight to advance to the Championship Round on Thursday. The Championship Round will feature Group A winner Jordan Lee, Group B winner Jacob Wheeler, and the top eight finishers from the Knockout Round competing in a final-day shootout for the top prize of $100,000.

“Man, that turned in to a little bit of a nail-biter towards the end, but we got it done,” Wheeler said in his postgame interview. “I was sitting on a decent bed fish, and I really didn’t want to catch it if I didn’t have to. I was on it for kind of a safety thing – if Keith caught one near the end, I wanted to make sure that I had enough to still win and earn the auto-qualification into the Championship Round.”

Wheeler didn’t fish much, Tuesday. He caught two good scorable bass off of the beds in Period 1, then spent most of the day looking for more bed fish and trying to find developing patterns for Thursday’s Championship Round.

“I caught a lot of fish the last couple of days, but I shook some fish off a couple of different times as well,” Wheeler said. “I didn’t go to any of the 4+ pounders that I have marked on the bed. Ultimately, I feel like those fish are the ones that are going to help you win the Championship Round.”

Wheeler has sight-fished this week with a white craw-style bait and a bait that he said is more “translucent.”

“Some fish are a little bit goofier and you have to throw the more natural-type colors, and then some of the fish want more of a visual-type thing and I can get those fish to bite the straight white craw,” Wheeler said.

“They’re saying we’re going to have lots of rain, clouds and wind for our final day,” Wheeler went on to say. “The fish I shook off today gave me an idea of some different baits that I think I can use to trigger the fish into biting. It’s my third Championship Round auto-qualification this season, so maybe the third time is the charm and we can close this thing out and get the win.”

Poche had the best day on the water among the 40 competitors today but was disappointed that he wasn’t able to catch Wheeler.

“Man, I was so close,” Poche said in his post-game interview. “I had a really good day and I fought hard; I almost got it done. I lost some key fish that would have really put me over the top. But that’s just the way it goes, sometimes.

“I was catching them on a (Berkley) MaxScent General,” Poche continued. “It was a 5-inch, green-pumpkin, and I fished it on a shaky-head rig – nice and simple. But they were smoking it. I figured out some stuff and was looking for the right kind of banks – a little wind blowing on them really helped.

“We did all we could, and it was a lot of fun, but we came up a little bit short today,” Poche went on to say. “Hopefully we’ll catch them good in the Knockout Round tomorrow.”

The six-day tournament, hosted by Central Missouri’s Tri-County Lodging Association, the Lake of the Ozarks Fishing Council and BassingBob.com, showcases 80 of the top pro bass-fishing anglers in the world competing for a purse of $805,000, including a top cash prize of $100,000 to the winner. The tournament is livestreamed each day at MajorLeagueFishing.com and the MOTV app, and also filmed for broadcast later this fall on the Discovery Channel.

The top 20 pros in Qualifying Group B that now advance to Wednesday’s Knockout Round on Lake of the Ozarks are:

The 40 Anglers in Group A competed in their two-day Qualifying Round on Saturday and Monday – the 40 anglers in Group B on Sunday and Tuesday. Now that the Qualifying Round is complete, the anglers that finished in 2nd through 20th place from both groups advance to Wednesday’s Knockout Round, while the winner of each group advances directly to Thursday’s Championship Round. In the Knockout Round, weights are zeroed, and the remaining 38 anglers compete to finish in the top 8 to advance to the Championship Round. In the final day Championship Round, weights are zeroed, and the highest one-day total wins the top prize of $100,000.

Anglers will launch each day at 7:30 a.m. from the Grand Glaize Marina Recreation Area, located at 711 Public Beach Road in Osage Beach. Each day’s General Tire Takeout will be held at the Marina, beginning at 4 p.m. Fans are welcome to attend all launch and takeout events and also encouraged to follow the event online throughout the day on the MLF NOW!® live stream and SCORETRACKER® coverage at MajorLeagueFishing.com.

On Championship Thursday, May 5, from 4 p.m. to 6 p.m. MLF will host a Celebration Event for fans of all ages, inviting fans to come out and celebrate with the professional anglers from the Bass Pro Tour as they crown the champion of the Bass Boat Technologies Stage Four on Lake of the Ozarks Presented by Bass Cat. The FREE, family-friendly event will be fun for fishing fans of all ages. The first 50 middle school or high school anglers will receive a free Abu Garcia rod and reel combo valued at $100. The final 10 Championship Round Bass Pro Tour anglers will be on hand to meet and greet fans, sign autographs, take selfies and participate in tackle giveaways.

The Bass Boat Technologies Stage Four on Lake of the Ozarks Presented by Bass Cat features anglers competing with a 2-pound minimum weight requirement for a bass to be deemed scorable. Minimum weights are determined individually for each competition waters that the Bass Pro Tour visits, based on the productivity, bass population and anticipated average size of fish in each fishery.

The MLF NOW!® broadcast team of Chad McKee, Marty Stone and J.T. Kenney will break down the extended action on all six days of competition from 7:45 a.m. to 4:30 p.m. CT. MLF NOW!® will be live streamed on MajorLeagueFishing.com and the MyOutdoorTV (MOTV) app.

Television coverage of the Bass Boat Technologies Stage Four on Lake of the Ozarks Presented by Bass Cat will premiere as two two-hour episodes at 7 a.m. ET, on Saturday, Oct. 15 and Saturday, Oct. 22 on the Discovery Channel. New MLF episodes premiere each Saturday morning on the Discovery Channel, with additional re-airings on the Outdoor Channel. Each two-hour long reality-based episode goes in-depth to break down each day of competition.