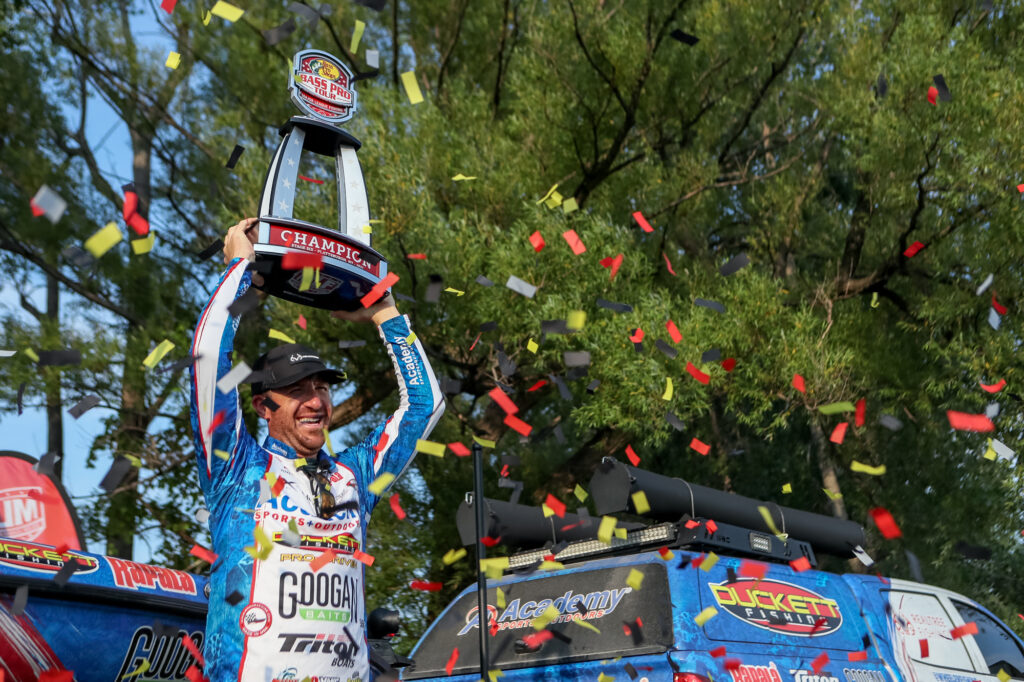 “It’s crazy to think – three wins this year. Absolutely crazy,” Wheeler said. “It’s been an unbelievable year. I just try to have that mindset – don’t ever give up, don’t ever give in. Just constantly working and preparing for the next one. There is so much hard work that goes into these events. And it still takes a lot of things to go right to come out on top against this group of guys.

“It takes so much time out here on the water,” Wheeler continued. “I just love this sport. I love competing. I love preparing for events. I love competing against this group of guys. These guys right here that I’m fishing against are the best in the world, hands down. The absolute toughest group of guys to beat. You have to bring your “A” game, day in and day out. Fishing against the best pushes me to become better. I’ve been truly blessed coming up here this season – New York has been pretty dang good to us.”

“It was just typical smallmouth stuff,” he said. “Most of them came on a drop-shot rig, and some on a Ned rig. It came down to several different Ned style baits. I threw a (Googan Baits) Rattlin’ Ned and caught 3 or 4 key fish on it today. I also caught them this week on some fluke-style baits. It seemed like profile and color really mattered. Sometimes I had to go translucent. Sometimes I had to go lighter line. Sometimes I could get away with heavier line. It was really just trial and error each day.

“It’s really just been a progression of figuring it out this week, slowly but surely. It wasn’t fast and furious, but little clues gave me hints to certain things and I kind of dialed it in as the week went on. You have to keep an open mind and that’s been the biggest thing for me this year – fishing stuff that I think looks good, develop the pattern and figure it out throughout the week and it gets better and better.”

Despite Wheeler’s already incredible season, he still has one goal left for the year – the Bass Pro Tour Angler of the Year (AOY) title. Pro Ott DeFoe of Blaine, Tennessee, who finished the event in 3rd place, has had an incredible season in his own right, and with one event remaining in the season he currently owns a 12-point lead over second-place Wheeler in the AOY race.

“I love Ott to death. He is unreal everywhere we go,” Wheeler went on to say. “It’s going to be battle. If either of us slip up one time, one day, it’s over. Whoever wins is going to have to make a top-10 at Stage Seven in Detroit, and we’ve got our work cut out for us. Realistically, I could have a phenomenal finish and still get beat. I’m just going to worry about winning another tournament and if it works out, it works out. I don’t have any AOY pressure – I’m going to prepare for that tournament to win it.”

Florence, Italy’s Jacopo Gallelli, who qualified to compete in this tournament after winning the Tackle Warehouse Pro Circuit event at the Potomac River in June, caught 21 bass totaling 57 pounds, 5 ounces to finish second and win $45,257.

“I tell you, with this situation I had this morning, this second place (finish) is like a win,” Gallelli said. “I lost 2 hours of fishing – 1½ hours because of mechanical issues and another half hour when we went idling back into the creek. So, I cannot be more happy about being second. Especially considering this field. This field is made of the 80 most skilled anglers in the world, and I proved it to myself and everybody that I can compete at this level.

“If somebody was thinking the Potomac River was just a fluke, I demonstrated to everybody that it was not, most of all to myself,” Gallelli went on to say. “I did my best, and dealt with a very bad situation, so I am very proud of myself and very happy.”

Overall, there were 143 bass weighing 411 pounds, 2 ounces caught by the final 10 pros on Tuesday.

Wheeler also won Tuesday’s $1,000 Berkley Big Bass Award, weighing a 4-pound, 15-ounce smallmouth on a drop-shot rig in Period 2 to earn the prize. Shaw Grigsby and Takahiro Omori split the $3,000 Berkley Big Bass award for the largest bass of the event as each weighed in a 5-pound, 14-ounce largemouth on Days 2 and 3 of competition.

The Toyota Stage Six at Lake Champlain Presented by Googan Baits featured anglers competing with a 2-pound minimum weight requirement for a bass to be deemed scorable. Minimum weights are determined individually for each competition waters that the Bass Pro Tour visits, based on the productivity, bass population and anticipated average size of fish in each fishery.

The MLF Bass Pro Tour Toyota Stage Six at Lake Champlain Presented by Googan Baits was hosted by the Adirondack Coast Visitors Bureau and the City of Plattsburgh. The six-day tournament featured the top professional anglers from around the world competing for a top cash prize of $100,000 to the winner.