MASSENA, N.Y. (June 27, 2021) – After Friday’s record-setting pace, Sunday’s Qualifying Round finale was a much tougher, grueling day on the water for the 40 anglers in Group A at the Major League Fishing (MLF) Bass Pro Tour General Tire Stage Five at the St. Lawrence River Presented by Berkley in Massena, New York. 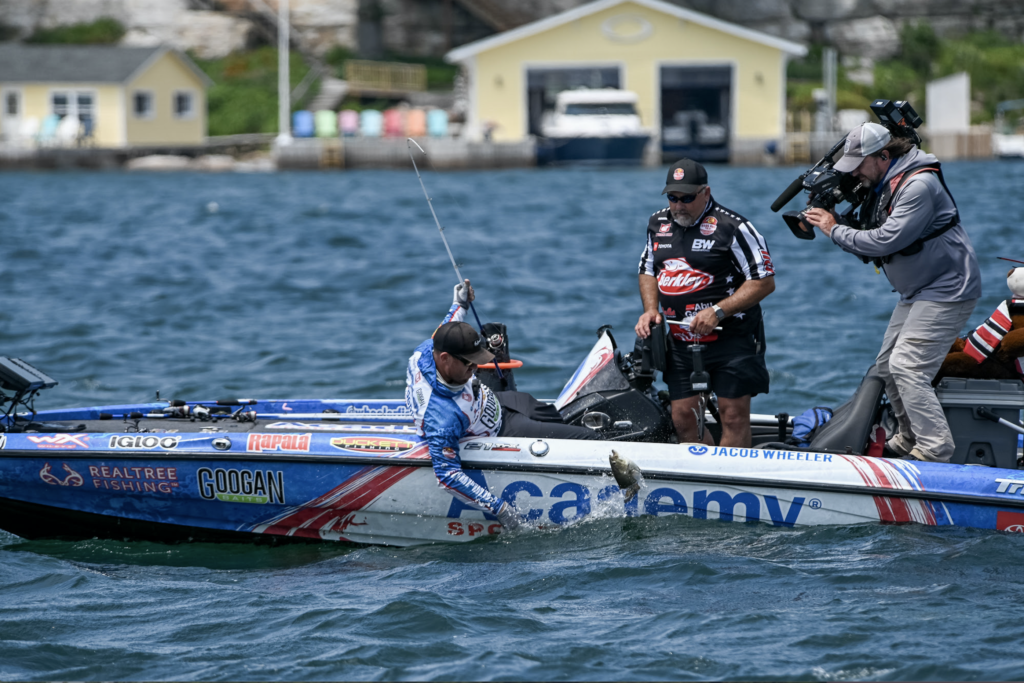 After battling the windy conditions, when the final bass was tallied on SCORETRACKER™ Academy Sports + Outdoors pro Jacob Wheeler of Harrison, Tennessee, coasted to victory in Group A, catching 66 bass totaling 222 pounds, 1 ounce – a new Bass Pro Tour record for the heaviest two-day Qualifying Round weight. The six-day event, hosted by the Town of Massena and Fish Massena, features 80 of the top professional anglers from around the world competing for a purse of $805,000, including a top cash prize of $100,000 to the winner.

Pro Brent Ehrler of Redlands, California, boated a two-day total of 59 bass totaling 190-13 to end the day in second place after starting in third. Berkley pro Justin Lucas of Guntersville, Alabama, caught 52 bass weighing 177-9 over two days to finish the round in third place. Toro pro Jeff Sprague of Point, Texas , ended the round in fourth place with a two-day total of 59 bass for 172-4. Rounding out the top five was Favorite Fishing pro Jonathon VanDam of Kalamazoo, Michigan, who caught the heaviest weight of the day Sunday – 25 bass for 77-15 – to finish with a two-day total of 54 bass for 172-4 and advance in fifth place.

The top 20 anglers from Group A will now enjoy an off-day Monday, while the 40 anglers in Qualifying Group B will complete their two-day Qualifying Round of competition. The Knockout Round, featuring 38 anglers competing to finish in the top eight, will take place on Tuesday. Wednesday’s Championship Round will feature Wheeler, Monday’s Group B winner, and the top eight anglers from the Knockout Round competing in a final-day shootout for the top prize of $100,000.

“To break another record just feels unbelievable,” said Wheeler. “I’ve been catching fish in all three phases of the spawn, this week. Some of the fish were set up and cruising – those are post-spawners. Some of them were actually sitting on the edges of those points, and those were pre-spawners. And then there are bass spawning on top of the points around the islands, and I’m just rotating through them.

“I rotated between a drop-shot rig, using a Rattlin’ Ned from Googan Baits called a Blue Penny, and then throwing the same bait but actually on a Ned rig,” Wheeler continued. “I threw them on my 7-foot medium action Signature Series Duckett rod on one and my 7-foot, 2-inch medium-heavy Signature Series Duckett rod on the other.
“I’m excited to qualify for the Championship Round and have another chance to take home a W,” Wheeler went on to say. “In the last event at Chickamauga I finished second, and I want nothing more than to tie my buddy Otter (Defoe) and win two events in one year.”

Ehrler also used the drop-shot rig Sunday, but credited his Daiwa Tatula LT reel and its faster gear ratio as being the key to his day.

“I caught them very similar today to how I did the first day – pitching and casting to light and dark spots on some of these main river reefs,” Ehrler said. “I’ve been drop-shotting a Roboworm with a Gamakatsu G Finesse Drop Shot hook and a 3/8-ounce Ark Tungsten sinker. The key was really my Daiwa Tatula LT reel, though.

“A lot of times today I would pitch into these light spots in the current and when the fish would bite they would move off and swim down the current very fast,” Ehrler continued. “My line would go slack, but luckily I was able to pick up a lot of line quickly with the LT and it’s faster gear ratio. That was really important in getting these fish in the boat today.”

The top 20 pros from Qualifying Group A that now advance to Tuesday’s Knockout Round on the St. Lawrence River are: