DEL RIO, Texas — As the weekend progressed, the temperatures on Lake Amistad warmed up and so did Jason Williamson.

The
third-year BASS pro from Aiken, S.C., shoved aside consistency and
posted a backbreaking total of more than 68 pounds through the final
two days. It was more than enough to climb from 38th to third on Day 3
then secure his first BASS victory and the accompanying $100,000 top
prize Sunday at the 2009 Bassmaster Elite Series season opener, the
OPTIMA Batteries Battle on the Border. 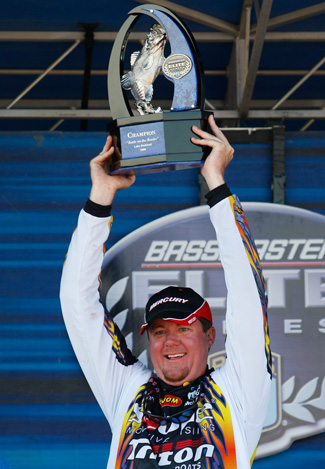 Williamson’s four-day total of 96 pounds, 6 ounces, was enough to hold off a consistent Alton Jones
of Waco, Texas, who finished second with 87 pounds, 15 ounces.
Williamson was able to overtake Jones with a tremendous two-day charge,
which accounted for more than 70 percent of his weight.

Williamsons’
catches Saturday and Sunday were all cultivated from one
ultra-productive spot that yielded nothing for him in the first two
days of competition. However, as the rain died, the clouds dissipated
and the sun came out, the spot became crystal clear and an ideal area
for big bass.

The area included three to four submerged trees
positioned around a drainage channel and was a pathway for visiting and
departing bass. Williamson mined the area with an 8-inch Osprey
swimbait, which he threw to the trees in nearly 20 feet of water.

“There
were so many fish in that area that I think they were in competition
for my bait,” said the 28-year-old. “That’s not a bad thing when you
can get that going. It was like clockwork.”

No stranger to the
particulars of the area, Williamson first found his productive spot in
2007 at an Elite Series event. He primarily focused on it at a 2008
Elite event and finished fifth, his best performance in an Elite event
at the time. The key to enticing the right bites this year, he said,
was allowing the swimbait to sink and keeping it wet for lengths of
time.

Williamson has been close to a BASS victory before,
scoring two second-place finishes, but he was able to close the deal
this time at Amistad with a final-day total of 34-12, the biggest bag
of the tournament. His limit was buoyed by a 10-4 lunker, the largest
Williamson has ever landed.

“I’m just a country boy who grew up
loving to fish, so you bet this is a huge deal. The victory solidifies
everything I have ever done in this sport,” Williamson said. “It’s also
a shot in the arm for the rest of the season. I can fish with
confidence now. The timing of this win was just perfect.”

While
Jones finished second, it was more a case of Williamson seizing the day
than Jones slipping. Jones, a steady veteran approaching $2 million in
BASS career earnings, stuck with what put him in contention instead of
going the unpredictable route and hunting for big bass.

While
many others shuffled around the leaderboard throughout the tournament,
Jones hung near the top, establishing a solid pattern that yielded fish
in the 4- to 6-pound class. 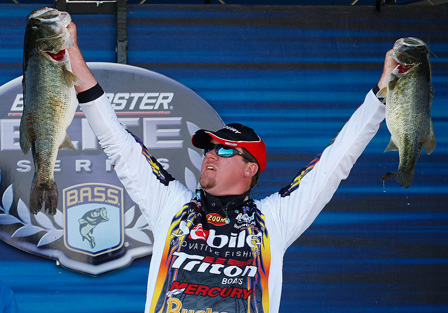 All
of his weighed fish fell for a Texas-rigged 6-inch Yum Dinger. The 2008
Bassmaster Classic champion threw the rig to shallow water, sometimes
in less than 2 feet, and the key to his success was executing long
casts to precise locations and slowly and deliberately fishing the
bait.

“I maximized my area and overall it was a great week,”
said Jones, 45. “You don’t mind getting beat by a giant bag like that.
You never are pleased with second place but I gave myself a shot at it
and that is all you can ask for.”

It was a relative struggle for some of the other anglers who made the top-12 cut to fish the final day of competition. Jared Lintner of Arroyo Grande, Calif., and Stephen Browning of Hot Springs, Ark., were able to take advantage.

Like
Williamson, both made charges after Friday. Lintner (76-10) advanced
from 20th after two days to finish third, while Browning moved from
25th to fourth. Rounding out the top five was Day 2 leader Gary Klein of Weatherford, Texas, who finished with 74 pounds, 8 ounces.

Day 1 leader Mike Iaconelli,
who landed the biggest bass of the tournament on the first day, a 12-13
behemoth, placed seventh and was followed by four-time Toyota Tundra
Bassmaster Angler of the Year Kevin VanDam of Kalamazoo, Mich.,
(eighth) and 2007 Bassmaster Classic champion Boyd Duckett of Demopolis, Ala., (ninth.)

Fishing fans can catch all of the on-the-water action from the March
12-15 OPTIMA Batteries Battle on the Border on The Bassmasters, which
airs Saturday, March 28, at 9 a.m. ET on ESPN2.